Daniel 6 Daniel in the Den of Lions 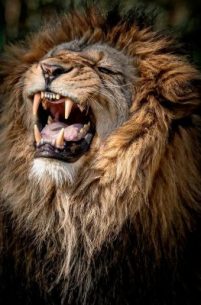 Daniel in the Den of Lions

Daniel was taken to the den of lions.

What do you think about this law that if the king signs a document, it cannot be revoked?

Did you notice what Darius told Daniel?

Daniel may your God rescue you from the lions den.

Walvoord gives this information regarding a Den of Lions:

Ge. Host, in his work Fez and Morocco, p. 77, describes the lions’ dens as they have been found in Morocco. According to his account, they consist of a large square cavern under the earth, having a partition-wall in the middle of it, which is furnished with a door, which the keeper can open and close from above…The cavern is open above, its mouth being surrounded by a wall of a yard and a half high, over which one can look down into the den. This description agrees perfectly with that which is here given in the text regarding the Lions’ Den. (Keil, Carl Freidrich, Biblical Commentary on the Book of Daniel. M. G. Easton, trans. [Grand Rapids: Eerdmans, 1955], 216) (Walvoord, John F. Daniel. [Chicago: Moody Publishers, 2012], 173)

“Daniel’s personal piety and faithfulness to God had made an obvious impression Darius, giving the king some hope that Daniel’s God might come to his rescue.” (Walvoord, 173

17. A stone was rolled into place to close the opening to the den of lions.

Does this remind you of the stone that was rolled over the grave of Jesus?

18. “In keeping with his grief for Daniel, the Scriptures record that the king fasted, did not have the usual diversions or entertainment, and was unable to sleep.” (Walvoord, 175)

“Verses 18-20 seem to support the idea that the king had his doubts about the ability of Daniel’s God to provide deliverance.” (Walvoord, 173)

Rushed to the Den of Lions

19. At the break of day or first morning light the king rushed to the den of lions.

20. Near the den of lions his anguished voice rang out,

“O Daniel, servant of the living God, is thy God, whom thou servest continually, able to deliver thee from the lions?”

“This was a test of deity. Darius knew of no gods who could stop the mouths of lions. If Daniel’s God could do that, then the king’s theology needs some reconstruction.” (Gangel, 171)

“God simply used the forces that He already had in place. He used an angel.” (Phillips, John. Exploring the Book of Daniel: An Expository Commentary. [Grand Rapids: Kregel Publications, 2004],105)

This is the usual greeting when speaking to the king.

22. My God sent His angel who protected me.

“Daniel evidently had been given the same assurance as had his three friends in the fiery furnace that God could and would deliver him. ‘His angel’ was evidently the same One Nebuchadnezzar had seen in the fiery furnace—the pre-incarnate Christ Himself.” (McGee, J. Vernon, Thru the Bible: Volume III: [Nashville: Thomas Nelson, 1983], 566)

“Daniel informed the king of the miracle God had done on his behalf. Daniel attributed this not only to the power of God, but to the fact that he was innocent of any crime either against God or the king.” (Walvoord, 176)

23. Daniel was brought out of the den of lions, unharmed.

“The aged man of God emerged before the unbelieving eyes of the king and his servants without a scratch because of his faith in God (Hebrew 11:32-33). Just as the flames had not been able even to bring the smell of smoke upon Daniel’s companions in chapter 3, so the lions were not permitted to touch the prophet of God.” (Walvoord, 176)

24. Those who plotted against Daniel were thrown into the den of lions!

“Darius delivered two messages here. The first message was to those people who were servants of Darius. Let them beware of trying to manipulate the king; they will come to a bad end.” (Phillips, 106)

“The second message was to the subjects of Darius. Who but the true and living God could have preserved Daniel in the den?” (Phillips, 106)

“Let’s notice that the lions were not fed 120 families of politicians but rather the accusers, the crooked caucus who had placed the king in this dreadful dilemma.” (Gangel, 171)

25. King Darius sent a letter to all the peoples on the earth.

“Much as Nebuchadnezzar had done in both chapters 3 and 4, Darius issued a decree to be sent throughout his entire domain calling on people everywhere to fear the God of Daniel.” (Walvoord, 177)

“The expression ‘Peace be multiplied to you’ is identical to Daniel 4:1 and reminds one of the letters of Paul in the New Testament.” (Walvoord, 178)

“Much as Nebuchadnezzar had done in both chapters 3 and 4, Darius issued a decree to be sent throughout his entire domain calling on people everywhere to fear the God of Daniel.” (Walvoord, 177)

“The expression ‘Peace be multiplied to you’ is identical to Daniel 4:1, and reminds one of the letters of Paul in the New Testament.” (Walvoord, 178)

26. I make a decree, That in every dominion of my kingdom men tremble and fear before the God of Daniel:

for he is the living God,
and stedfast for ever,
and his kingdom that which shall not be destroyed,
and his dominion shall be even unto the end.
27. He delivereth and rescueth,
and he worketh signs and wonders
in heaven and in earth,
who hath delivered Daniel
from the power of the lions.

“Verses 26-27 are in the form of a hymn in the original. Once again, throughout the world of Daniel’s day, the tidings were carried of the great God who is living, powerful, everlasting, and greater than the gods of the pagans.” (Walvoord, 178)

Daniel “would live several more years to study the Scriptures and pray as well as revise his memoirs.” (Walvoord, 172)

“This concludes the strictly historical section of the Book of Daniel. From this point on the book will be mainly concerned with the visions and prophecies which were given to Daniel over the long period of his life spent in a foreign land.” (McGee, 567)