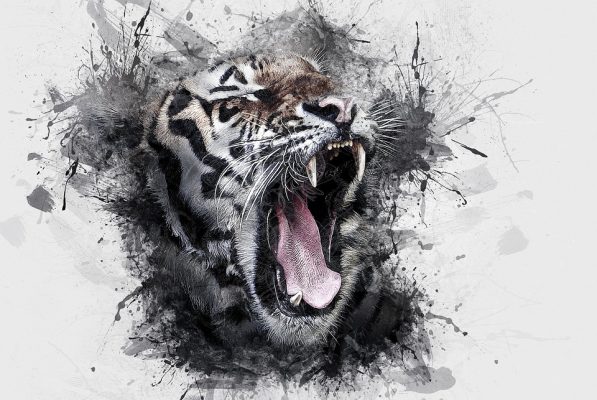 Daniel 7:1-8 Daniel had a dream about four great beasts. A lion, a bear, a leopard, and a fourth beast that was terrible, strong, with iron teeth are described in this vision.

“God gives to Daniel several visions of four beasts which are quite remarkable…Daniel did not record these visions in the historical section but gathered these prophetic visions together in this second section of his book.” (McGee, J. Vernon, Thru the Bible: Volume III: [Nashville: Thomas Nelson, 1983], 567)

1. We first learned of Belshazzar in chapter 5. Daniel had this dream during Belshazzar’s first year of being king.

Daniel saw a vision as he was on his bed.

“’Visions’ suggests that the first three beasts are given in the first vision, the second vision concerned the fourth beast only, and the third vision is a scene in heaven. Therefore, there are actually three visions which are recorded here.”(McGee, 568)

“Daniel was in obscurity in Babylon at this time, and I think he had more opportunity to give attention to the Word of God and to writing. Perhaps it was in this period that he recorded the first part of the Book of Daniel.” (McGee, 568)

He wrote down the dream.

I learned in a psychology class the way to help remember your dreams is to write them down as soon as you wake up. This might mean having a writing tablet next to your bed.

2. Daniel told us in this vision the four winds of heaven were stirring up the great sea.

“The image of wind in the book of Daniel tends to be used of God’s sovereign power and therefore suggests a picture of heavenly forces. “ (Gangel, Kenneth O. Holman Old Testament Commentary. [Nashville: B&H Publishing Group, 2001], 184)

“Daniel also saw the great sea, an immediate reference to the Mediterranean, with much wider application to another phrase we commonly use today, ‘the sea of humanity’” [Luke 21:25; Matthew 13:47; Revelation 13:1]. (Gangel, 185)

3. There were four beasts coming out of the sea. Each was different.

“It seems clear that the sea represents the nations and the four great beasts represent the four great world empires that are given subsequent revelation.” (Walvoord, John F. Daniel. Chicago: [Moody Publishers, 2012], 188)

4. Can you visualize a lion with eagle wings?

“This lion had eagle’s wings, and that makes it an unusual lion. This eagle’s wings denote the ability that Babylon had of moving an army speedily.” (McGee, 569)

“The first beast, like the ones that followed, came up from the stormy sea, a symbol of the warring nations of humankind.” (Phillips, John. Exploring the Book of Daniel: An Expository Commentary. [Grand Rapids: Kregel Publications, 2004], 113)

The fact that it did not have any wings “refers to the humbling of Nebuchadnezzar in his mental lapse and loss of identity.” (McGee, 569)

It was standing on its two feet “denotes Nebuchadnezzar’s restoration. He became like a beast and acted like one, but his mind was restored, and he was brought back to sanity.” (McGee, 569)

This happened when Nebuchadnezzar looked to heaven and gave credit to God praising him in chapter 4:34.

A man’s heart was given to it. “I believe this refers to Nebuchadnezzar’s conversion. I think he came to know the living and true God.” (McGee, 569)

“The second empire had none of the speed of the first one; a bear is relatively slow in contrast to a lion…It achieves its objectives by sheer strength and brute force, seeking to crush its victims in the embrace.” (Phillips, 114)

“The three ribs in the bear’s mouth describe accurately the initial conquests of the Medo-Persian alliance. The three kingdoms that the Medo-Persian Empire swallowed were Lydia, Babylon, and Egypt.” (Phillips, 114)

“The empire was to devour much flesh, a characteristic of the Medo-Persian method of waging war. It never moved unless it had overwhelming force with which ,to crush all resistance. It was wasteful of human life.” (Phillips, 114)

“The leopard, with its grace and beauty, speed, and ferocity, was a fitting symbol of Alexander the Great and the Greek Empire. The four wings of the leopard added to the picture depicting the amazing speed with which the youthful Macedonian subdued the entire world.” (Phillips, 115)

The four heads of the leopard symbolize the division of Alexander’s empire by his four generals: Cassander, who took Macedon and Greece; Lysimachus, who took Asia Minor and Thrace; Seleucus, who took Syria, Upper Asia, Babylon, and the East; and Ptolemy, who seized Egypt, Palestine, and Arabia. Eventually, Palestine became a political football, kicked about by the heirs of Seleucus and Ptolemy. These two divisions of the Greek Empire, therefore, became the subject of future prophecy [Daniel 8, 11). (Phillips, 115)

7. Behold a fourth beast, dreadful and terrible, and exceedingly strong.

“Probably the most decisive argument in favor in interpreting the fourth empire as Roman is the fact that the New Testament seems to follow this interpretation. Christ’s reference to the ‘abomination of desolation’ [Matthew 24:15] clearly pictures the desecration of the temple, here prophesized as a future event.” (Walvoord, 199)

It had great iron teeth; “and this identifies it with the legs of iron of the image vision—which is the Roman Empire.” (McGee, 571)

“A monster with great iron teeth and claws of brass, devouring, breaking everything in pieces, and stamping beneath its feet what remained.” (Phillips, 116)

“We want to get the explanation that the Spirit of God has given to us, and that will deliver us from any speculation.” (McGee, 570)

“This nondescript beast with ten horns represents the Roman Empire, just as the legs of iron of Nebuchadnezzar’s image did.” (McGee, 570)

“This section is very important to us because we are living in the time of the fourth beast—the time when the ten toes and horns are beginning to manifest themselves.” (McGee, 571)

“The ten horns corresponded to the ten toes of Nebuchadnezzar’s image. They likewise identify the Beast in Daniel’s vision with the Beast in John’s vision.” (Phillips, 117)

“What gripped and mystified Daniel, however, was something new and uncanny: the emergence of a malignant little horn among the others. This little horn uprooted three of its competitors.” (Phillips, 117)

“’In this horn were eyes,’ denoting human intelligence and genius.” (McGee, 572)

“’A mouth speaking great things’ denotes the blasphemy of this man.” (McGee, 572)