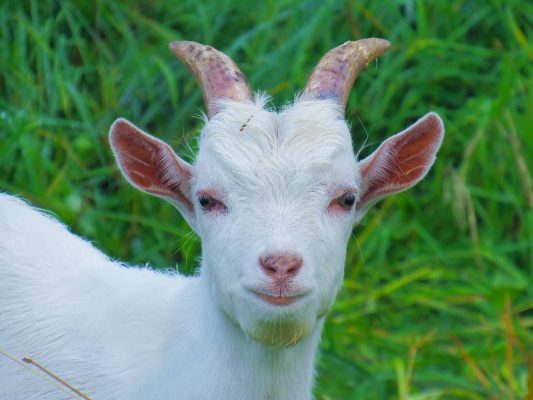 Daniel 8:9-14 is considered a prophecy about Antiochus who debased the Jewish temple. He stopped them from worshipping God. He is a little horn.

This continues from Daniel 8: 1-8 which tells us about the Ram and Goat.

9. A little horn that was powerful went toward the east, south and Israel.

“Antiochus Epiphanes is one of the supreme types of the coming Antichrist in both Scripture and History.” (Phillips, John. Exploring the Book of Daniel: An Expository Commentary. [Grand Rapids: Kregel Publications, 2004], 138)

“The horn, small in the beginning, grew in three directions. The implication is that the point of reference is Syria, that ‘the south’ is equal to Egypt, ‘the east’ is in the direction of ancient Medo-Persia or Armenia, and the ‘glorious land’ refers to Israel or Canaan, which lay between Syria and Egypt…The word here could refer to Jerusalem in particular rather than to the land in general.” (Walvoord, John F. Daniel. [Chicago: Moody Publishers, 2012], 229)

“The ‘host of heaven’ is a poetical description of God’s chosen people; ‘the stars’ are prominent individuals among them.” (Phillips, 140)

“This statement is admittedly difficult to interpret. I think that the natural interpretation is that Antiochus challenged God and was permitted to capture Jerusalem and the temple. This warfare included the spiritual realm where angels and demons were involved. Some of the feats attributed to Antiochus are astounding; if they are true, demonic power was exhibited.” (McGee, J. Vernon, Thru the Bible: Volume III: [Nashville: Thomas Nelson, 1983], 580)

Some of the Israelites were persecuted.

“Almost every commentator assumes a reference here to the people of God, perhaps particularly the priests. We remember Joseph’s dream about stars and leadership (Genesis 37:9-10) and how God promised Abraham that his people would be great in number as the stars (Genesis 15:5; 22:17).” (Gangel, 227)

Regarding the host being angels, “Antiochus had no control whatsoever over God’s messengers; such a connection is more poetic than realistic.” (Gangel, 227)

11. “The little horn, fulfilled in Antiochus Epiphanes historically, magnified himself even to the Prince of the host. By this is meant that he exalted himself up to the point of claiming divine honor, as brought out in this name ‘Epiphanes, which refers to the glorious manifestation such as belonged to God.” (Walvoord, 231)

12. “Antiochus plundered the temple in Jerusalem and with great ferocity massacred Jews who resisted him.” (Phillips, 141)

“Antiochus threw ‘truth to the ground,’ that is, the truth of the law of Moses, practiced his activities and seemingly prospered.” (Walvoord, 232)

Holy one “refers to one of God’s created intelligences other than man—what we would call a supernatural creature.” (McGee, 580)

“This profaning of the temple is called here a ‘transgression of desolation [KJV].’” (McGee, 580)

14. After reading the four commentaries listed below about this, I can only say that it is confusing to me. I am taking the easy way out!

McGee tells us “if the twenty-three hundred days are taken as being literal twenty-four-hour days, the period would be between six and seven years, which approximates the time of Antiochus who began to perpetrate his atrocities in about 170 B.C. Finally the Jewish priest, Judas Maccabeus (‘the little hammer’), drove out the Syrian army, at which time the temple was cleansed and rededicated after the pollution.” (580)