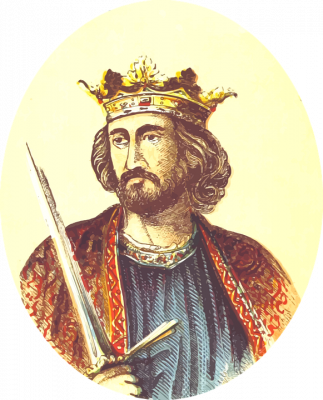 1. This is the concluding verse of chapter 10 where the angel Gabriel is telling us that he has been with Daniel from the first year of Darius the Mede.

“This verse links more closely to chapter 10 that it does to chapter 11 because it reflects the words of the angel rather than the words of Daniel.” (Gangel, Kenneth O. Holman Old Testament Commentary. [Nashville: B&H Publishing Group, 2001], 286)

2. Gabriel is telling Daniel he will be told the truth. There are three kings in Persia with the fourth richer than the first three.

“The first three kings to which the herald angel referred where Cambyses (the Ahasuerus of Ezra 4:6, Pseudo-Smerdis (the Artaxerxes of Ezra 4:7-23, and Darius Hystaspes (the Darius of Ezra 4:24)…The fourth Persian emperor, the one who was significant from the viewpoint of Bible prophecy: the wealthy and mighty Xerxes (the Ahasuerus of the book of Esther.)” (Phillips, John. Exploring the Book of Daniel: An Expository Commentary. [Grand Rapids: Kregel Publications, 2004], 190)

Xerxes “kept Asia in turmoil as he stirred up his vast realm against Greece…So, as the prophecy states, Xerxes did ‘stir up all’ against the realm of Greece.” (Phillips, 190)

3. A great king is coming who will do what he wants.

“The facts are that Alexander the Great in conquering the Persian Empire was repaying Persia for the attack by Xerxes I. Alexander was indeed ‘a mighty king’ and the remaining description fits him perfectly.” (Walvoord, John F. Daniel. [Chicago: Moody Publishers, 2012], 330)

Alexander “had great dominion and was absolute ruler who did as he wished.” (Walvoord, 330)

4. When he dies his kingdom will be divided between his generals.

“The angel predicted that Alexander’s kingdom would be broken and divided ‘toward the four winds of heaven.” (Walvoord, 330)

“The empire of Alexander the Great eventually fell into the hands of his four generals and did not preserve the glory and power it had in his day…This event, recorded in Daniel’s prophecy written about 539 B.C., was fulfilled between the time Alexander died in 323 B.C. and 301 B.C. (Walvoord, 331)

5. The King of the South will be the strongest.

Seleucus was able to “gain control of the entire area from Asia Minor to India; and in time, he became stronger that Ptolemy who ruled Egypt.” (Walvoord, 331)

This describes he shall be strong above him, and have dominion; his dominion shall be a great dominion.

“Antiochus was already married to Laodice, whom he divorced. After two years Ptolemy Philadelphus died; so Antiochus Theos put away Berenice with her son and took back his first wife, Laodice. She, in turn, poisoned Antiochus Theos and ordered the death of Berenice and her son. Then Laodice put her own son, Seleucus Callinicus, on the throne. That was some juggling act, and it is interesting how this is covered in the prophecy given to Daniel.” (McGee, 596)

To me this sounds like a modern-day soap opera.

7. “‘Out of a branch of her roots’ refers to one of the other children of Berenice’s parents—in fact, to her brother Ptolemy Euergetes (‘benefactor’), who succeeded his father Philadelphus on the Egyptian throne.” (Phillips, 193)

“Ptolemy raised an army and marched north to wipe out with blood the insults and crimes of the Syrian rulers. He captured Seleucia, ‘the fortress of the king of the north,’ subjugated the country, put Laodice to death, and treated the Syrians as he pleased.” (Phillips, 193)

King of the South

Ptolemy also took their princes, and with their precious vessels of silver and of gold.

“The precise accuracy of the prophecy written by Daniel three hundred years before it happened has occasioned the attack of the critics, but actually its detailed fulfillment is a support for the accuracy of scriptural prophecy as a whole.” (Walvoord, 334)