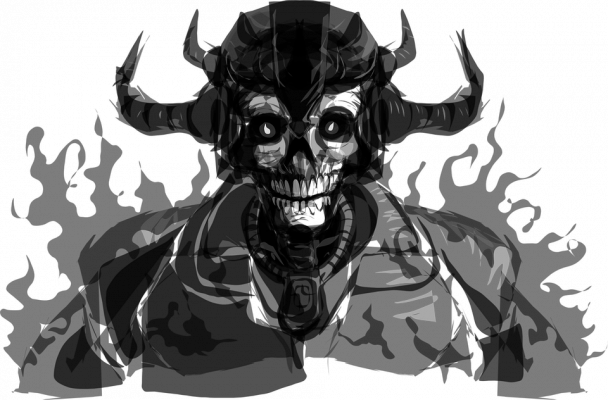 Daniel 7:15-28 Daniel is interpreting the vision he has just seen. Daniel wants more information about the Antichrist, the fourth beast with its ten horns.

15. The visions alarmed me.

“By ‘my spirit’ he referred to his whole personality. The expression ‘my spirit within me’—literally, ‘in the midst of the sheath’—compares the soul in the body to a sword in his sheath.” (Walvoord, John F. Daniel. [Chicago: Moody Publishers, 2012]. 210)

16. Daniel “broke one of the great rules of masculinity—he asked for directions.” (Gangel, 204)

“Daniel was not some kind of mystical wizard with paranormal powers of perception and communication. His understanding of dreams and visions came from God himself and not from his own skill or learning.” (Gangel, Kenneth O. Holman Old Testament Commentary. [Nashville: B&H Publishing Group, 2001], 204)

We do not know who Daniel asked but he was nearby. This one was able to tell Daniel what the interpretation was. My belief is that God had him near.

17. Four beasts will come from the earth.

“There would be four passing kingdoms of men and the fifth permanent kingdom of the Messiah.” (Phillips, John. Exploring the Book of Daniel: An Expository Commentary. [Grand Rapids: Kregel Publications, 2004], 124)

18 “The point that interested the celestial being, and that he seems to have presumed would most interest Daniel, was the fact that eventually” the saints of the Most High shall receive the kingdom and possess the kingdom forever, forever and ever. (Phillips, 124)

20. He also wants to know more about the ten horns.

Daniel “wanted to know about the ferocity of the fourth beast and about its features, especially about the ten horns and the tiny horn, the horn that could see and speak.” (Phillips, 124)

“When the empire begins to take shape again, it will be in the form of a confederacy, a union of ten ‘kings,’ or heads of state.” (Phillips, 124)

21. This horn makes war with the saints.

“It should be noted that Rome will again be a world power under Antichrist.” (McGee, J. Vernon, Thru the Bible: Volume III: [Nashville: Thomas Nelson, 1983], 575)

McGee quoted Bishop J. Sheen, “The Antichrist will come as the great humanitarian. He will talk peace, prosperity and plenty, not as a means to lead us to God but as ends in themselves.” (McGee, 575)

“Up to this point conflict had occurred only between the Ancient of Days and the fourth beast; now the horn not only attacked the saints; he defeated them.” (Gangel, 207)

22. This will last until the Ancient of Days comes.

“Clearly this passage describes the persecution of the people of God by the Antichrist until he is stopped by the Ancient of Days. He is defeated, the warfare stops, and the saints possessed the kingdom.” (Gangel, 207)      Revelation 7:9-17

23. The fourth kingdom will be different from the others.

Another one who is different comes after the ten kings and will subdue three kings.

25. He shall speak great words against the most High.

“One of the characteristics of Antichrist is that he is against God and against Christ. That is one of the meanings of ‘antichrist’; the other meaning is to imitate Christ.” (McGee, 576)

“Enemies of Antichrist are not just three of the ten kings who preceded him but ultimately the people of God and God himself.” (Gangel, 209)

The saints of the Most High will be worn out.

“The little horn will change customs and laws.” (McGee, 576)

“That is, to change times of religious observances and traditions such as characterize those who worship God.” (Walvoord, 215)

He will terrorize the saints for three and a half years.

“Given other Scriptures (cf. Daniel 4:25 where periods of times equals years), the meaning seems clearly to refer to the last three and one-half years preceding Christ’s second advent, which will bring in the final form of God’s kingdom on earth.” (Walvoord, 216)

26. The reign of the Antichrist will be stopped.

“This is not some mystical or spiritual reference to general judgment, because now we see that it relates to the Antichrist. When the court will sit [NIV], he loses his power and control which will be completely destroyed forever [NIV].” (Gangel, 210)

27. The saints will be given authority by the Most High.

“At the destruction of the fourth empire, the kingdom becomes the possession of God’s saints.” (Walvoord, 216)

“This is a reference to the eternal kingdom which appears first in the millennial aspect [see Revelation 20] and then opens up into eternity.” (McGee, 576)

28. Daniel was troubled by his vision.

Daniel “described again how his thoughts troubled him, but kept the matter in his heart, that is, did not reveal it to others.” (Walvoord, 217)

“The study of prophecy in this day is not for the selfish gratification of idle curiosity or vain knowledge. Rather, the careful, study of prophetic Scripture has a transforming effect upon the life of a believer.” (McGee, 577)