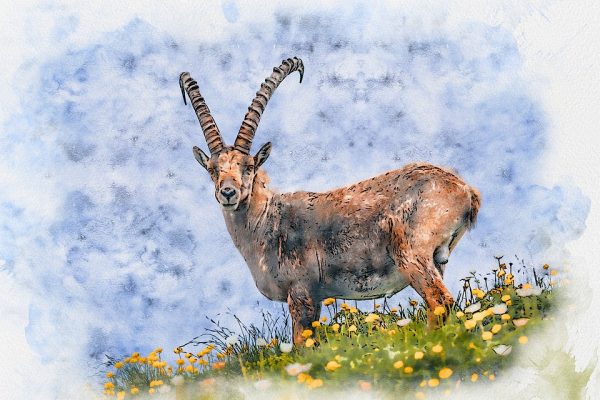 Daniel 8:1-8 Daniel had a vision that included a Ram and a Goat. God is using the Persian army under the command of Alexander to prepare the west for the arrival of Jesus.

In Acts 16:6 the Holy Spirit forbade Paul from taking the gospel to Asia. And in Acts 9-10 God told Paul to go to Macedonia.

“Daniel 8 tells the story of how Persia and Greece conquered the worlds of their time and how out of that latter nation rose a wicked ruler who became a prototype of the Antichrist, still ahead of us is in human history.” (Gangel, Kenneth O. Holman Old Testament Commentary. [Nashville: B&H Publishing Group, 2001], 223)

“In chapters 1:1—2:4 and from chapters 8-12, Daniel wrote in Hebrew. These sections deal particularly with the Hebrew people…From chapters 2:5 to 7:28, Daniel wrote in Aramaic, a Gentile Language; these chapters relate specifically to the Gentile world empires.” (Phillips, John. Exploring the Book of Daniel: An Expository Commentary. [Grand Rapids: Kregel Publications, 2004], 129)

1. During the third year with King Belshazzar Daniel had a second vision

2. Daniel was in Susa by the river Ulai.

“The reason for the setting of the vision being at Susa rather than at Babylon is that this vision concerns the second and third world empires. The events foretold in this vision were all fulfilled within two hundred years.” (McGee, 578)

3. There was a ram with two horns, one higher than the other.

“This ram, then, with its two horns and one horn more prominent than the other, is the Medo-Persian empire with the Persians being in the ascendancy.” (McGee, 578)

“The portrayal of the two horns representing the Medo-Persian Empire is very accurate, as the Persians coming up last and represented by the higher horn were also the more prominent and powerful.” (Walvoord, 225)

4. The ram charged all directions except east.

The Ram charged toward the north, south and west. Toward the west they subdued Babylon, Mesopotamia, Syria, and Asia Minor. Turning to the north: Colchis, Armenia, Iberia, and regions around the Caspian Sea were vanquished. Palestine, Egypt, Libya, and Ethiopia were the countries crushed toward the south. At the height of power, no countries could overthrow the Persian Empire. (Phillips, 132)

“Under Xerxes, Persia intended to move west, but from the west came this goat which was moving so fast it ‘touched not the ground’—that corresponds to the four wings of the panther and denotes the speed with which Alexander moved his army.” (McGee, 578)

The goat had a horn between his eyes.

“Such speed characterized Alexander. The unusual horn—one large horn instead of the normal two—symbolically represents the single leadership he provided.” (Walvoord, 227)

“Daniel then watched the goat attack the ram, the Medo-Persian Empire, that he had seen by the Ulai canal. An unusual feature of the goat’s attack was its fury, borne out by history.” (Walvoord, 227)

7. Attacking the ram, the goat broke both the horns causing the ram to not be able to fight against him.

“The one-horned goat (Greece under Alexander) trampled the two-horned ram and both kingdoms (Media and Persia) were destroyed.” (Gangel, 225)

The Greeks “decimated [the] tremendous Persian army as it attempted to advance through the pass a few soldiers at a time.” (McGee, 578)

The Persian “fleet of three hundred vessels was destroyed by a storm.” (McGee, 579)

“This marked the last effort of the East to move toward the West; no great advance was ever made again.” (McGee, 579)

“There is no discrepancy between history, which records a series of battles, and Daniel’s representation that the Medo-Persian Empire fell with one blow.” (Walvoord, 227)

8. Alexander the Great was powerful. The horn was broken.

Alexander “was seized by a fever after a nightlong drinking bout, and he died in Babylon in the year 323 B.C. at the age of thirty-two.” (McGee, 579)

“Practically all commentators recognize the four horns as symbolic of the four kingdoms of the Diadochi which emerged as follows:

(1) Cassander assumed rule over Macedon and Greece;
(2) Lysimachus took control of Thrace, Bithynia, and most of Asia Minor:
(3) Seleucus took Syria and the lands to the east including Babylonia;
(4) Ptolemy established rule over Egypt and possibly Palestine and Arabia Petraea.(Walvoord, 228)

Daniel’s prediction of Alexander’s empire being divided was precise. Especially being divided into four kingdoms. (Walvoord, 228)