Revelation 22 I Am Coming Soon 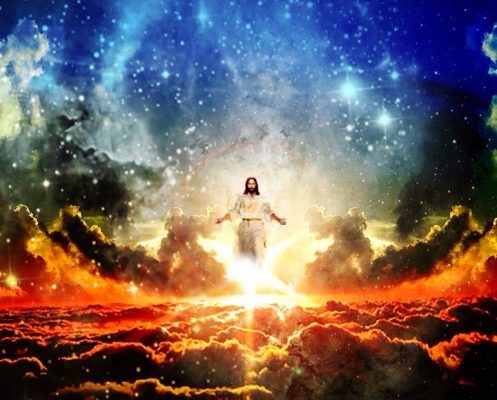 Another transition of speakers, this time it is Jesus speaking.

My reward is with me

I will give to each person according to what they have done.

“Believers eternal rewards will be based on their faithfulness in serving Christ in this life. There works will be tested, and only those with eternal value will survive.” (MacArthur, 299)

13. I am the Alpha and the Omega, the First and the Last, the Beginning and the End.

“Each of these three titles has appeared as a divine name earlier in Revelation; here is the only time all three occur together.” (Easley, Kendell H., Holman New Testament Commentary: Revelation. [Nashville: B&H, 1998], 420)

Jesus began Revelation telling us He is the Alpha and the Omega. Here He concludes with the same title.

14. “Blessed are those who wash their robes

“Those who keep on washing their robes (confess their sins regularly) are the ones who demonstrate that they have already washed their robes initially in the Lamb’s blood. This is identical to the point Jesus had made to Simon Peter on the night he washed the disciples’ feet: ‘A person who has had a bath [that is, washed their robes and made them white at initial conversion] needs only to wash his feet [that is, washing the soiled spots off their robes]” (John 13:10; see also 1 John 1:9) (Easley, 420)

“Soiled clothes represent sinfulness in Isaiah 64:6 and Zechariah 3:3; whereas Psalm 51:7; Isaiah 1:18; and Titus 3:5 speak of the cleansing of sin that accompanies salvation. The agency through which that cleansing comes is the blood of Christ.” (MacArthur, 308)

Are You Washed in the Blood of the Lamb (https://lyricstranslate.com/en/christian-hymns-songs-are-you-washed-blood-lyrics.html)

That they may have the right to the tree of life

“Those who have experienced the washing from sin that marks salvation will forever have the right to the tree of life.” (MacArthur, 308)

They may go through the gates into the city.

“Those granted access to the tree of life will be allowed to enter by the gates into the city.” (MacArthur, 308)

• Dogs—a symbolic term for various impure persons; used in Scripture for male prostitutes as well as for those who distorted the gospel (Deuteronomy 23:17-18; Philippians 3:2)
• Those who practice magic arts—or “sorcerers”; the use of witchcraft, spells, and drugs to extend personal power and pleasure (9:21; 21:8)
• The sexually immoral—or “fornicators”; always a violation of God’s command because it violates the sacredness of marriage (9:21; 21:8)
• Murderers—always condemned by God throughout Scripture as a violation of the sacredness of life (9:21; 21:8)
• Idolaters—worshiping that which is not God violates the sovereignty of the Almighty (21:8)
• Everyone who loves and practices falsehood—People like this have nothing to do with the truth; they have followed the devil, who is the great deceiver and liar (12:9)
(Easley, 421)

“If a person’s life is characterized by these sins, the person thereby indicates that he is unredeemed. One person might commit a murder, repent, and be saved; but if a person is a murderer, he is not saved.” (Easley, 421)

16. Here is the only place in the Bible where I, Jesus appears.

“It establishes that this final invitation in Scripture is not a human invitation, but a divine call issued personally to sinners by the Lord Jesus Christ.” (MacArthur, 307)

Have sent my angel to give you this testimony for the churches.

“He confirms that the messenger of the vision was my angel and that it is testimony for the churches.” (Easley, 422)

Revelation 3:22 was the last time “church” was mentioned in Revelation. (Easley, 422)

I am the Root and the Offspring of David,

“Jesus describes Himself as ‘the bright Morning Star.’” (MacArthur, 307)

“Have you noticed that the bright and morning star always appears at the darkest time of the night? Its appearance indicates that the sun will be coming up shortly.” (McGee, J. Vernon, Thru the Bible: Volume V: [Nashville: Thomas Nelson, 1983], 1079)

“The appearance of the bright and morning star indicates that the sun will be coming up shortly.” (McGee, 1079)

“The Spirit is certainly the Holy Spirit, who is responsible to ‘convict the world of guilt in regard to sin and righteousness and judgment’ (John 16:8).” (Easley, 423)

And let the one who hears say, “Come!”

“The second come stands to remind all who have heard the good news that they are responsible to invite others to Christ.” (Easley, 423)

Let the one who is thirsty come

Are you thirsty for Jesus and eternal life? Revelation 21:6 New Heaven

Let the one who wishes take the free gift of the water of life.

“That is the invitation that goes out today. If you are tired of drinking at the cesspools of this world, He invites you to come. What an invitation this is to come to Him!” (McGee, 1079)

“God saves sinners, but only those who recognize their need and repent.” (MacArthur, 305)

18. I warn everyone who hears

John added a “personal warning from himself as the one who penned the words of the prophecy of this book.”

If anyone adds anything to them

“It is not directed to future scribes who will be copying the book and might be careless in accidentally adding or deleting words…Rather, the warning is for everyone who hears—the ones in the seven churches who will have the book read to them (1:3); by extension all hearers or readers down through the ages are included.” (Easley, 423)

To those who add to the book of Revelation God will add to that person the plagues described in this scroll.

19. And if anyone takes words away from this scroll of prophecy,

“The one who adds to the prophecy of this book or who takes words away from this book of prophecy is the one who hears and then deliberately distorts the message of Revelation.” (Easley, 423)

Whoever adds or removes words from Revelation God will take away from that person any share in the tree of life and in the Holy City, which are described in this scroll.

“No true believer would ever deliberately tamper with Scripture. Those who know and love God will treat His Word with the utmost respect.” (MacArthur, 310)

“The Lord’s warning here is addressed to those who engage in deliberate falsification or misinterpretation of Scripture, those whom Paul denounces as peddlers of the Word of God. (2 Corinthians 2:17).” (MacArthur, 310)

“In light of the repeated warning against altering God’s Word, Christ’s warning must be broadened to include all of Scripture.” (MacArthur, 309)

20. He who testifies to these things says

It is Jesus who testifies to these things.

Realizing it has been 2000 years since this was written, I think McGee means it may not be today or tomorrow, but Jesus will return. We need to be ready!

“But about that day or hour no one knows, not even the angels in heaven, nor the Son,[some manuscripts do not have nor the son] but only the Father.” Matthew 24:36

“The true solution to all the problems of either the individual or the society is not human achievement but the return of the Lord Jesus.” (Easily, 424)

“Things will not continue forever as they are. Jesus will return, just as Revelation predicts. If the certainty of Christ’s return to judge sinners does not motivate people to repent, then nothing will.” (MacArthur, 312)

21. The grace of the Lord Jesus be with God’s people. Amen.

It is fitting that these are “the last words of the Bible.” (MacArthur, 312)

“Grace is offered to all, but if any man (regardless of his merit) refuses the offer which is extended, he must bear the judgment pronounced in this book.” (McGee, 1080)

This concludes this study of the Book of Revelation.

Are you ready to meet Him?

“Grace is unconditional kindness issued to someone who doesn’t deserve it.” (Easley, 424)

“The Lord of glory, as He promised in Scripture, offers heaven exclusively to those who, in light of His certain return, accept His gracious invitation and return to Him.” (MacArthur, 312)

This concludes this study of the Book of Revelation.

Are you ready to meet Him?