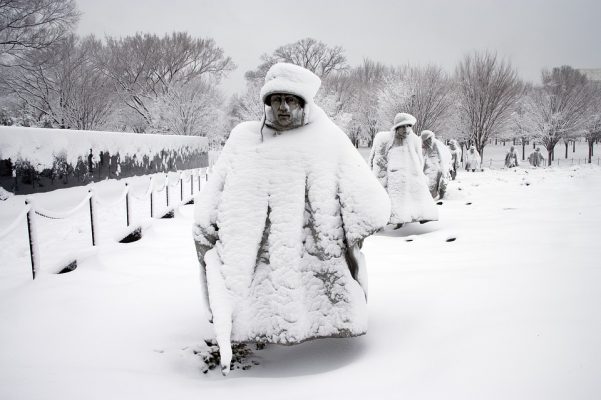 Marie and I invited several close friends to our home, one evening. We had a wonderful time, and during the evening, one guest – I’ll call him Anthony – told us a remarkable Korean War story.

Anthony, who fought in the bloody Battle of Pork Chop Hill, recounted how, during that battle, he came across one of our mutual friends; I shall call him “Ken.” Though Anthony was brought up in a Christian home, he was not at that time a strong Christian; however, Ken, the son of an ordained evangelical minister, was fervent in the Lord. Concerned with the possibility of actually killing someone – even an enemy combatant – he applied for consciences objector status. It was refused, since our denomination does not encourage military conscientious objections; moreover, it provides chaplains for all branches of the military and offers counseling programs by our clergy at several military bases. And so, Ken was drafted into the infantry.

Learning from Ken’s records that he was had requested conscientious objector status, his officers considered him a problem. Risking a court marshal, Ken refused to fire weapons or serve in any capacity where he was required to kill another human being. He told his superiors that he would perform any hazardous task, as long as it did not include his pulling a trigger or firing a weapon to kill others, so they assigned him to the hazardous duty of driving fully-loaded ammunition trucks and supplies to the front-lines and there distributing them to the combat troops. Since the enemy suspected the large trucks of transporting ammunition, they would zero in on them with mortar fire.

Early, one cold and blustery morning, Anthony, now a front line combatant, happened to be one of those who received supplies from Ken. Neither had known the other was serving in the same outfit. Though their parents attended different churches, the two young men had often met each other in their teens. Anthony’s home church had a large young people’s group, and he attended the meetings spasmodically to meet girls. Since the youth meetings of the two churches fell on different days of the week, Ken frequently attended both groups. Now the two met on a battlefield.

“Is it really you, Ken? What are you doing here? I thought you were a conscientious objector.”

“I am; that’s why they have me distributing ammo, but I don’t mind. Hey, it’s good we came across each other. I met some other Christians here.

We’re starting a Bible study and prayer group. How about attending?”

“I’m not into that stuff. Some other time, maybe.”

“Don’t wait too long, Tony. Now that I know you’re here, I’ll ask the guys in the Bible study group to pray for you.”

“Just pray for yourself, and leave me out of it. If I need prayers, I’ll go to the chaplain’s tent.”

“You can’t stop us from praying for you, Tony. See you later.” And Ken drove off.

The “later” proved to be sooner than either one expected. The setting for the second encounter was the gory “Battle of Pork Chop Hill.” At the “Hill,” Ken still was hauling ammunition to the front lines, when he again met Anthony, who appeared haggard, weary and somewhat glad to see Ken. The two paused to converse for several minutes.

“Have you heard from home, Ken? No, I haven’t received a letter from anyone except my family.”

“I hear from my family, but the members of our youth group also write to me. I mentioned to them that I met you here. They’re praying for us.”

Anthony fell silent, his former opposition to prayer dissipated. Face, hands, combat boots, helmet, and battle-garb, showing the consequences of the see-saw battle for the Hill, he appeared the quintessential antithesis of the “Be All You Can Be” recruiting posters used to seduce enlistees. Finally, he replied, “I appreciate that. I sure need their prayers.”

“Do you and your Christian buddies still hold a Bible study?”

“Well, we haven’t lately because of the Hill. But once things lighten up, we’ll start it again.”

“Let me know when you do. I want to attend. Do you have a Bible you can loan me?”

“Sure do.” Ken reached into a pocket and drew out a military New Testament. “Here, keep this. Begin by reading the Gospel of John. Then read the Acts of the Apostles, the Book of Romans, and the rest of the books. Maybe, after the Hill, the C.O. will give us some time off. Then we can talk about what you read.”

Anthony nodded, wearily, and Ken left. It was the last time the two saw each other in Korea. Anthony was severely wounded at Pork Chop Hill. He was evacuated to a field hospital, and then to the States. After an extended recuperation at a military hospital, he was honorably discharged and sent home.

Eventually, Ken also was honorably discharged from duty and returned home. At the first service he attended at his home church, he met Anthony.

“Hello Ken. I had to come to this service because I heard you’d be here. My wish is to thank you for all you did for me in Korea. I really believe I’m still alive only because of those who were praying for me. If it weren’t for those prayers, I’d have been killed on the Hill. I’ve accepted Jesus as my Savior, and I’m trying my best to serve Him.”

Anthony eventually felt called to the ministry. He attended seminary, received ordination, and is a successful, soul winning, pastor. Ken, on the other hand, is a prosperous Christian businessman, who serves in a lay leadership position in his home church. Just as he was faithful to God on a distant battlefield, he is faithful to his Lord now that he is home.

Josprel is the author of two novels, “Beloved Apostate” and “Kanfal.”