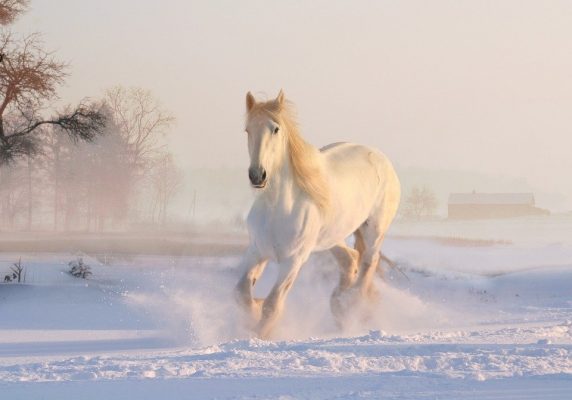 In Revelation 19 Jesus leaves heaven on a white horse. This is his second coming. This article gives more detail about His Second coming.

“This is the great climactic event toward which all things in this world are moving today.” (McGee, J. Vernon, Thru the Bible: Volume V: [Nashville: Thomas Nelson, 1983], 1048)

“Heaven opens to let Christ exit. The white horse on which He rides is the animal of warfare.” (McGee, 1049)

“So important is the second coming of Christ that the Bible lists several compelling reasons why Jesus must return to earth.” (MacArthur, John. New Testament Commentary: Revelation 12-22. [Chicago: Moody Publishers, 2000], 211)

There before me was a white horse

“The name Jesus or Christ is never used in this part of the chapter, but the identity of the rider is crystal clear.” (Easley, 352)

“He is called by four different titles in six verses.” (Easley, 352)

“In his seventh letter, the risen Christ called himself the ‘faithful and true witness’ to the Laodicean Christians (3:14).” (Easley, 352)

“God has entrusted him with awesome responsibility for his Second Coming: with justice he judges and wages war.” (Easley, 353)

“Jesus is omniscient and therefore has all the information necessary to judge properly”. (Easley, 353)

On his head are many crowns.

The crowns worn by Jesus signifies “His royal rank and regal authority.” (MacArthur, 217)

“Many means He has collected all of the rulers’ crowns signifying that He alone is the sovereign ruler of the earth.” (MacArthur, 217)

“Collecting the crown of a vanquished king was customary in the ancient world.” (MacArthur, 217)

He has a name written on him that no one knows but he himself.

This is the second title for Jesus.

“Because Christ is infinite, unknowable aspects of his attributes will always remain.” (Easley, 353)

13. He is dressed in a robe dipped in blood

“The blood is the blood of His slaughtered enemies.” (MacArthur, 217)

His name is the Word of God.

Word of God is the third title for Jesus.

14. The armies of heaven were following him.

“The heavens opened to reveal not only ‘Faithful and True’ but also the armies of heaven.” (Easley, 354)

The armies were riding on white horses.

What an image! An army with each member riding on a white horse.

“That these armies will include redeemed humans is further indicated by their attire: fine linen, white and clean, the same apparel as the ‘bride of the Lamb’ (v. 8).” (Easley, 354)

15. Coming out of his mouth is a sharp sword.

“That the sword comes out of His mouth symbolizes the deadly power of Christ’s words.” (MacArthur, 219)

In Genesis 1 all God had to do to create the world was to speak!

Is there any doubt that his mouth is a sharp sword?

He will only use words to strike down the nations.

“He will swiftly judge all sin and instantly put down any rebellion.” (MacArthur, 219)

He treads the winepress of the fury of the wrath of God Almighty.

“That vivid symbol of God’s wrath comes from the ancient practice of stomping on grapes as part of the wine-making process. The splattering of the grape juice pictures the pouring out of the blood of Christ’s enemies.” (MacArthur, 220)

16. On his robe and on his thigh he has this name written:

This is “across His chest and hanging down on His upper leg as He rides.” (MacArthur, 220)

“No scholar knows what significance the placement of the names entail.” (Easley, 355)

King of Kings and Lord of Lords.

“This is two titles—the only other place they appear together in Scripture, the order is reversed (17:14). In other parts of Scripture, the two titles are given separately to God; now together, they are written indelibly on the very person of Christ.” (Easley, 355)

“The name ‘King of Kings and Lord of Lords’ expresses His sovereign triumph over all foes and His absolute rule in His soon to be established kingdom.” (MacArthur, 221)

In this article Scripture quotations taken from the NIV. Copyright by Biblica, Inc.®  Unless otherwise noted.