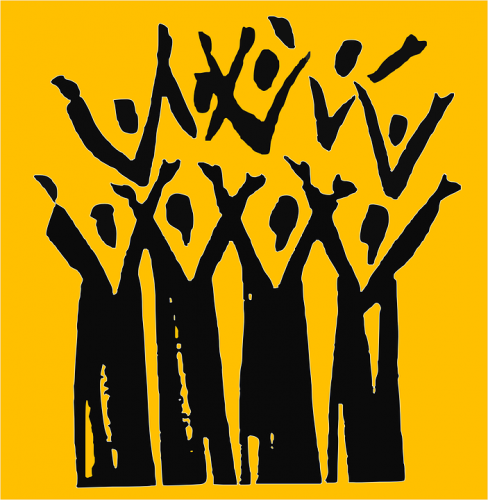 In Revelation 19 a multitude in heaven is shouting Hallelujah! The Antichrist and False Prophet have been cast into hell. Now it is satan’s turn.

1. After this I heard what sounded like the roar of a great multitude in heaven shouting:

Imagine a sporting event. A goal is scored! The crowd goes wild!!!

In many sporting events, especially a championship game, there is a great multitude watching. Whither it be at the event or on broadcast media.

What do they do to cheer on their team?

Shout. The great multitude is shouting!

Here a heavenly choir is shouting!

What are they shouting?

In the Old Testament Hallelujah is translated as Praise the Lord!!!

“Hallelujah! Hallelujah because God is coming to judge, and the wicked are going to be removed from the earth.” (McGee, 1045)

Instead of justification and sanctification, salvation “celebrates the final aspect of salvation history, the glorification of the saints in the kingdom of Christ.” (MacArthur, 197)

“The imminent coming of Jesus Christ prompts this praise as the angels anticipate the glory of His Kingdom.” (MacArthur, 197)

Glory and power belong to our God.

2. For true and just are his judgments.

“This suggests strongly that God’s judgment on the great prostitute city actually began with the pouring out of the bowls in chapter 16.” (16:7) (Easley, 346)

The difference is in 16:7 it says: true and just are your judgments. In 19:2 (abpve) it says his judgments.

He has condemned the great prostitute

Babylon is the great prostitute condemned by God.

who corrupted the earth by her adulteries.

He has avenged on her the blood of his servants.

God avenged the blood of his servants.

“It is martyrs for whom divine justice must be served.” (Easley, 347)

3. And again they shouted:

The WIN is still being celebrated!

How long does the victory celebration last?

Until the next game or championship.

Again, Hallelujah is being shouted.

The smoke from her goes up for ever and ever.

“This indicates that this judgment is final, permanent, and irreversible.” (MacArthur, 199)

4. The twenty-four elders and the four living creatures were first introduced to us in Revelation 4:4-8.

Read the discussion in Throne in Heaven.

What did they do?

They fell down and worshiped God, who was seated on the throne.

5. Then a voice came from the throne

We are not told who is talking.

It did “come from the throne of God, because the Lord Jesus Christ is preparing to take control of this world.” (McGee, 1046)

Saying
“Praise our God
all you his servants,
you who fear him,
both great and small!”

“The heavenly voice calls them all, both small and great, rich and poor, male and female, young and old, to praise God for who he is and what he does.” (Easley, 348)

Do you praise God? God wants our praise.

The prostitute has been the focus of Revelation so far but will not appear again. (Easley, 348)

“Beginning with this verse and proceeding through Revelation 20:15, John’s attention will be drawn to the events connected with the great victory of Christ at his Second Coming.” (Easley, 348)

John could not see what was going on.

It must have been loud!

This is the last Hallelujah in the Bible!

For our Lord God Almighty reigns.

“The evil world system has been completely destroyed, and God’s kingdom has come in its fullness.” (MacArthur, 200)

7. Let us rejoice and be glad
and give him glory!

Rejoice, be glad and give him glory.

This is because of the wedding that is coming:

For the wedding of the Lamb has come

There were three distinct stages in a biblical wedding:

First was the betrothal, or engagement.

This was an arrangement by both sets of parents.

Second was the presentation, a time of festivities just before the ceremony.

The third and most significant stage of a wedding was the actual ceremony, during which the vows were exchanged.

At the end of the presentation festivities, the groom and his attendants would go to the bride’s house and take her and her bridesmaid to the ceremony.

His bride has made herself ready.

“The bride has made herself ready in the power of God, by the grace of God, through the work of the Spirit of God. Purged from all sin and impurity (cf. 1 Corinthians 3:12-15).” (MacArthur, 203)

“The church—that is, the body of believers all the way from Pentecost to the Rapture—will be presented to Christ as a bride for a marriage.” (McGee, 1046)

was given her to wear.

9. Then the angel said to me “Write this:

The angel will tell John what to write.

Blessed are those who are invited to the wedding supper of the Lamb!

This blessing is “from the viewpoint of God’s sovereignty into all matters of Salvation: blessed are those who are invited.” (Easley, 351)

“On the one hand, the church is the bride of the Lamb; on the other hand, individual Christians are the guests invited to participate in the wedding supper.” (Easley, 351)

“Although the angelic interpreter was ‘just’ an angel, his message must be recognized as the true words of God. (Easley, 351)

“Here is an important reminder about the authority of every word of Scripture. If the message is authorized by God, then the messenger’s word—whether spoken or written by prophet, apostle, or angel—is the same as God himself spoke. What God speaks is always true (Psalm 33:4; John 17:17; 2 Timothy 2:15).” (Easley, 351)

John felt “compelled to worship the angelic messenger: However, he is restrained from doing so. The angel is but a creature. Only God is to be worshiped.” (McGee, 2048)

The angel told John: Don’t do that! I am a fellow servant with you and with your brothers and sisters who hold to the testimony of Jesus.

“Worship is the theme of redemptive history, and the purpose for which believers were redeemed (John 4:23).” (MacArthur, 207)

For it is the Spirit of prophecy who bears testimony to Jesus.

We must be faithful to the testimony to Jesus.

“Christians are those who affirm that everything Jesus said and did was true (John 8:14). (Easley, 351)