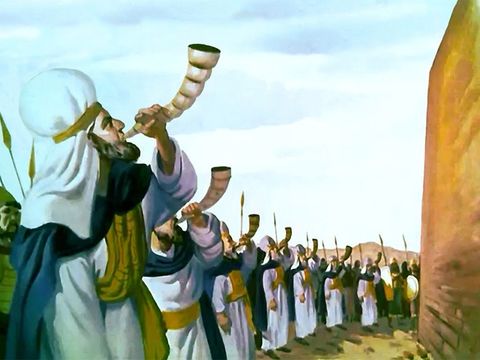 The Seventh Seal contains the seven Trumpets and the seven Bowls are part of the seventh Trumpet. In Revelation 5:1 John saw a book (scroll) which God was holding. In it contained the Seven Seals. This scroll is the “Title Deed to the earth.” (MacArthur, New Testament Commentary: Revelation 1-11. [Chicago: Moody Publishers, 1999], 164)

“The seven seals, the seven trumpets, the seven personalities, and the seven vials or bowls of wrath all concern the same period, but from a different angle.” (McGee. Thru the Bible: Volume V: [Nashville: Thomas Nelson, 1983], 958)

After all the worship and praise there was silence

The first verse I think of is Psalm 46:10 and I like the KJV for this verse:

Be still, and know that I am God

In this case judgment is about to begin and those in heaven anxiously wait for it to happen. (MacArthur, 237)

And those who reject Jesus will be judged!

2. I saw the seven angels which stood before God

These angels are called the “presence angels.” (MacArthur, 238)

And to them were given seven trumpets.

“In the Old Testament trumpets were used:

The trumpet was a “metal instrument of the first century (a long tube with a mouthpiece and a flared end) usually connected with warfare (1 Corinthians 14:8)”. Easley. Holman New Testament Commentary: Revelation. [Nashville: B&H, 1998], 142)

3. Another angel came and stood at the altar

See Exodus 30 (specifically verse 3) for a description of the earthly altar.

Here the altar is the heavenly counterpart to the earthly altar. (MacArthur, 240)

“A ‘censer’ is a bowl or firepan designed for holding live coals and incense.” (Easley, 142)

“Zacharias, the father of John the Baptist,” was burning incense in the Holy of Holies when an angel (Gabriel Luke 1) appeared and told him he would have a son. (MacArthur, 240)

The burning of incense symbolized prayers ascending to God. (MacArthur, 240)

That he should offer it with the prayers of all saints upon the golden altar which was before the throne.

“Now the prayers of all the saints are added to the cries of the martyrs at this golden altar which was before the throne of God.” [NIV] (Easley, 142)

4. And the smoke of the incense, which came with the prayers of the saints,

“The effectiveness of incense is measured by its smoke.” (Easley, 143)

Ascended up before God out of the angel’s hand.

God “is in agreement with the cries of the saints as they come into His presence, from which the seven trumpet judgments will be released”. (MacArthur, 241)

And the angel took the censer, and filled it with fire of the altar

“The people of the earth, having rejected the death of Christ for the judgment of their sins, must now bear the judgment for their own sins. The Great Tribulation is going to get under way.” (McGee, 962)

The angel filled the censer with fire from the altar!

Cast it to the earth

And there were voices, and thunderings, and lightnings, and an earthquake.

It will not take long for the effects to hit the earth.

McGee gave us the following to explain the thunder, sounds, lightning, and an earthquake.

“’Thunders’ denotes the approach of the coming storm of God’s judgment.”

“’Voices’ (sounds – KJV) reveals that this is the intelligent direction of God and not the purposeless working of natural forces. God is in charge.”

“The ‘earthquake’ is the earth’s response to the severe pressure which will be placed upon it during the judgment of the Great Tribulation Period.” (962)

This is the judgment, that the Light has come into the world, and men loved the darkness rather than the Light, for their deeds were evil. 20 For everyone who does evil hates the Light, and does not come to the Light for fear that his deeds will be exposed. John 3:19-20