“The blowing of the trumpets does not introduce symbols or secrets. The plagues here are literal plagues.” (McGee, Thru the Bible: Volume V: [Nashville: Thomas Nelson, 1983], 962)

6. The seven angels are prepared with their seven trumpets. They are ready to sound them.

The earth is moving into a divine judgment period that it cannot survive. (Easily, 143)

You will learn what God’s Wrath is all about.

God has patiently tried to show sinners He will forgive them. People have not repented and accepted Him.

The fact that they are mixed with blood “is reminiscent of Joel 2:30, which also describes the Day of the Lord”. (MacArthur, 245)

And this mixture was cast upon the earth.

Is it possible that this caused an earthquake which triggered “worldwide volcanic eruptions”? (MacArthur, 245)

I have heard that underneath Yellowstone National Park in the United States is a volcano waiting to happen. And when it erupts the ash will affect the whole world. No, I have no idea when it might happen, but God could be holding it back for this very time.

Easley calls this “a divine warning of worse disasters to come, just like the ancient plagues on the land of Pharaoh”. (144)

All three commentaries listed at the bottom of this article compare this plague with the plagues that happened in Egypt (Exodus 7 through 11).

See a comparison chart of the ( Plagues in Exodus and Revelation )

8. And the second angel sounded,

Truly I say to you, whoever says to this mountain, ‘Be taken up and cast into the sea,’ and does not doubt in his heart, but believes that what he says is going to happen, it will be granted him.

Is this an asteroid coming through the atmosphere and burning up?

8d. A third of the sea became blood,

When this something hit the sea a third became blood, a third of the creatures which were in the sea and had life, died.

Then with a third of the ships being destroyed was it caused by a huge tsunami? (MacArthur, 248)

We have all seen “shooting stars” but this is different.

This is a great star that fell from heaven, burning as it were a lamp

It fell upon the third part of the rivers, and upon the fountains of waters;

Drinking water will become an issue. When a third of the fresh water becomes bitter (verse 11) what will we drink? (McGee, 964)

11. The name of the star is Wormwood.

Wormwood is mentioned eight times in the Old Testament, where it is associated with bitterness, poison, and death. (MacArthur, 249)

And the third part of the waters became wormwood

Many men died of the waters, because they were made bitter.

Do you really want to be here? Repent and trust Jesus.

12. Many of us, if not all, have seen an eclipse when the moon goes in front of the sun, causing the earth to slightly darken.

This will be much worse!

Something to think about when a third of the sun, moon and stars are gone.

Life will not be pleasant.

Also, it was prophesied.

13. “Depicted in the vision as flying in midheaven, the bird would be at the height of the midday sun, thus visible to all. His loud voice assures that all will be able to hear his pronouncements. The eagle’s dire warning is that the last three trumpet judgments will be even more devastating that the first four.” (MacArthur, 251)

Woe, woe, woe is one threat for each of the following trumpets. (MacArthur, 251)

God’s wrath and judgment will come upon those who dwell on the earth. [NASB1995] (MacArthur, 251)

Still the people on the earth are not repenting and turning to Jesus.

The other voices of the trumpet of the three angels, which are yet to sound!! 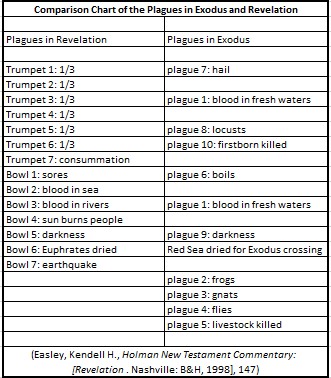