Revelation 9 Army from the East 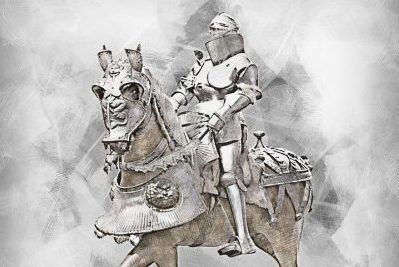 The Sixth Trumpet—Army from the East

An army of demons are coming from the East. They will be released to cause death on the earth to those who continue in their refusal to repent.

We are either with God or with Satan. One cannot be neutral, you either serve one or the other Matthew 6:24. Making the wrong choice results in eternal disaster. Of course, the choice is yours to make. People who reject “all offers of grace and mercy; they will see death come upon mankind through the trumpet and bowl judgments, which will deliver death on a scale unprecedented in human history.” They will still refuse to repent. “The sounding of the sixth trumpet heralds another, more severe demonic attack on sinful mankind.” This one will bring death. (MacArthur, New Testament Commentary: Revelation 1-11. [Chicago: Moody Publishers, 1999], 266)

13. When the Sixth Trumpet was blown John heard a voice.

We cannot identify who spoke.

“The horns of the [golden] altar projected traditionally from each of the top corners and represented strength (Exodus 36:25; 38:2).” (Easley, Holman New Testament Commentary: Revelation. [Nashville: B&H, 1998], 159)

The voice came from the golden altar which is before God.

“That golden altar speaks of prayer; that is what it spoke of in the tabernacle here on earth.” (McGee, Thru the Bible: Volume V: [Nashville: Thomas Nelson, 1983], 969)

See Exodus 30:1-10 for additional information on the altar.

“While sacrifices were not normally offered on the incense altar, the high priest was required to offer a sin offering on it once a year. That Illustrates the important biblical truth that atonement provides the basis for prayer, worship, and communion with God. No one whose sins have not been atoned for has access to God.”
(MacArthur, 268)

14. The voice was speaking to the Sixth Angel who was given a task that the other angels did not have.

“Loose the four angels which are bound in the great river Euphrates.”

Why do you think these four angels were bound?

Is it because they were demons?

That is the only answer.

Where were these angels?

They were bound in the great river Euphrates.

“Rising from sources near Mount Ararat in Turkey, the Euphrates flows more that seventeen-hundred miles before emptying into the Persian Gulf.” (MacArthur, 269)

Genesis 2 tells us that the Euphrates was one of four rivers which were near the Garden of Eden.

So, the angels were bound near the Garden of Eden.

Is it possible that these four angels “controlled the four major world empires of Babylon, Medo-Persia, Greece, and Rome? Daniel 10 provides insight into the warfare between holy angels and the demons that influence individual nations.” (MacArthur, 269)

15. The four angels who were bound at the Euphrates River in V14 had been prepared for the hour and day and month and year, were released. (MacArthur, 270)

This was in God’s timetable.

What are they going to do?

Slay the third part of men.

With the current population of the world that is over 2.5 billion people. Are you going to be one of those?

“For both the Israelites of the Old Testament and the Romans of the New Testament, hostile eastern armies were usually stopped by the Euphrates.” (Easley, 160)

What happens when the Euphrates no longer stops these armies?

Israel had controlled the land west of the Euphrates since Joshua ruled them.

16. The number of the army of the horsemen were two hundred thousand thousand:

This verse says the number of the armies of the horsemen was two hundred million (NASB).

Can you imagine an army of two hundred million (NASB1995)? I cannot!

This “may imply that the attacking force will be divided into four armies, each commanded by of the formerly bound demons.” (MacArthur, 271)

“No human army of such a size had ever appeared before.” (Easley, 160)

John heard the number of them

If John heard it and recorded it, I believe it.

Many demons have come together to become a demon army that is two hundred million strong. (MacArthur, 261)

17. John saw the horses and the riders:

“Notice that the colors are as striking as the horsemen are unnatural. ‘Fire’ is a fiery red; ‘hyacinth’ is the same color as the flower—dull, dark blue; ‘brimstone’ is light yellow.” (McGee, 971)

Lions destroy their prey. Do horses?

From verse 8 Easley, speaking about lions, said they, “tear apart their prey.” (158)

The demon army deprives people of oxygen with the fire and smoke and brimstone.

18. The word plagues will be used often until the end of Revelation. It is “a term for the destructive final judgments.” (MacArthur, 272)

Third part of men killed, by the fire, and by the smoke, and by the brimstone, which issued out of their mouths.

“One-third of nature had already been affected, but mankind had not been touched with a judgment of this magnitude. “(McGee, 971)

This will be a terrible way to die!

19. From verse 18 (above) we learned that power was in their mouths.

But this power is also in their tails

For their tails were like unto serpents, and had heads, and with them they do hurt.

“The tails of the locust demons were scorpion-like.

The tails of the horse-demons were snake-like.” (Easley, 161)

Behold, I have given you authority to tread on serpents and scorpions, and over all the power of the enemy, and nothing will injure you. Luke 10:19 NASB1995

If you trust Jesus with your heart “nothing will injure you.”

The harm is to those who do not repent or believe in Jesus Christ as their Savior!

20. Mankind had hardened their hearts. Have you?

“TODAY IF YOU HEAR HIS VOICE,
DO NOT HARDEN YOUR HEARTS.” Hebrews 4:7 [NASB]

They did not repent.

21. “When people worship idols, gods that do not exist, demons who do exist will impersonate those gods and hold those idolaters captive to their demonic power and deception. False religions are not void of the supernatural; they are full of it—because they are the best opportunities for demons to capture souls.” (MacArthur, 273)

MacArthur lists five sins listed here about those who refused to repent.