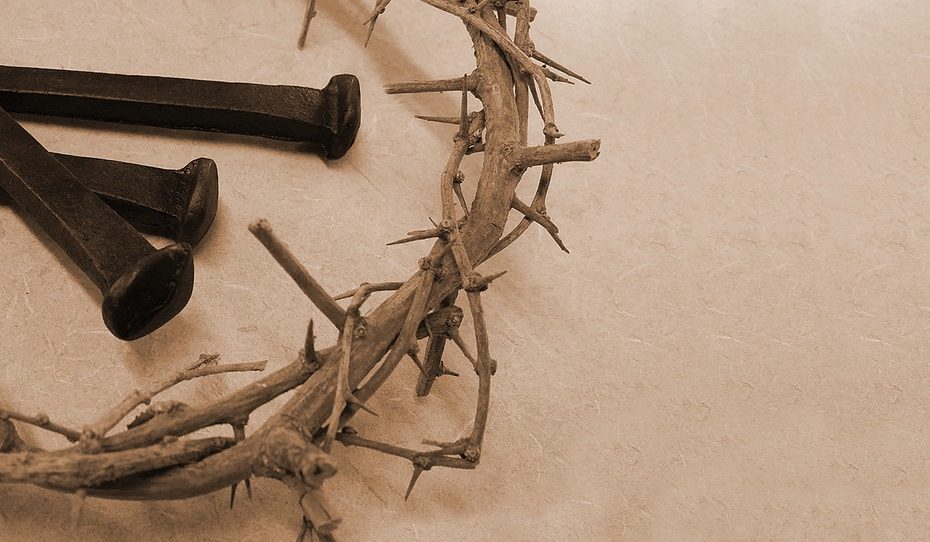 Jesus was again before Pilate who had Him flogged. The soldiers placed a Crown of Thorns on His head. Then they mocked Jesus.

1. “Scourging was a horribly cruel act in which the victim was stripped, tied to a post, and beaten by several torturers, i.e., soldiers who alternated when exhausted. For victims who were not Roman citizens, the preferred instrument was a short wooden handle to which several leather thongs were attached. Each leather thong had pieces of bones or metal on the end.” (MacArthur, John, The MacArthur Bible Commentary. [Nashville, Thomas Nelson Inc., 2005], 1418)

This reminded me of the cat-o’-nine-tails. You might want to research it.

2. “This ‘crown’ was made from the long spikes (up to twelve inches) of a date palm formed into an imitation of the radiating crowns which oriental kings wore. The long thorns would have cut deeply into Jesus’ head, adding to the pain and bleeding.” (MacArthur, 1418)

The purple robe “represented royalty.” This was “intended to mock His claim to be King of the Jews.” (MacArthur, 1418)

3. Jesus was mocked then struck.

4. Pilate did not find any fault in Jesus. He knew the accusation did not merit death.

5. He had Jesus brought out wearing the crown of thorns, and the purple robe.

“Pilate had called Him ‘King of the Jews’ (John 18:39), so the soldiers decided that the ‘king’ should have and a robe.” (Wiersbe, Warren W, The Bible Exposition Commentary New Testament Volume 1 Matthew-Galatians. [Colorado Springs: David C Cook, 2004], 380)

“Sin had brought thorns and thistles into the world (Genesis 3:17-19), so it was only fitting that the Creator wear a crown of thorns as He bore the sins of the world on the cross. The very metal He had created and placed in the ground was used to make nails to pound through His hands and feet.” (Wiersbe, 380)

“He is more than a man. He is the Son of God. He is the Savior of the world. John has written these things so that you might believe that Jesus is the Christ, the Son of God, and that believing you might have life in His name.” (McGee, J. Vernon, Thru the Bible: Volume IV: [Nashville: Thomas Nelson, 1983], 490)

6. The chief priests and officers shouted to Crucify Him!

“You take Him and crucify Him, for I find no fault in Him.” [NKJV]

“The pronouns ‘you’ and ‘Him’ have an emphatic force, indicating Pilate’s disgust and indignation at the Jews for their callousness toward Jesus.” (MacArthur, 1418)

8. “Pilate was afraid because he had just whipped and tortured someone who, in his mind, could bring down a curse or vengeance upon him.” (MacArthur, 1418)

9. “Pilate was concerned about Jesus’ origins. His superstitious mind was wondering just what kind of person he was dealing with.” (MacArthur, 1419)

10. “When we are afraid we are weak, we go to the other extreme and try to appear strong. This is what Pilate did as he reminded Jesus of his Roman authority. But his statement did not demonstrate his power, it demonstrated his weakness. For if he had the authority to release Jesus, why did he not do it?” (Wiersbe, 381)

11. “Even the worst evil cannot escape the sovereignty of God. Pilate had no real control (vv. 10, 11), yet he still stood as a responsible moral agent for his actions.” (MacArthur, 1419)

Greater sin [NKJV] The critical point is not the identity of the person, but guilt because of the deliberate, high-handed, and coldly calculated act of handing Jesus over to Pilate, after having seen and heard the overwhelming evidence that He was Messiah and Son of God. Pilate had not been exposed to that.” (MacArthur, 1419)

12. “In a final burst of courage, Pilate tried to release Jesus. John does not tell us what steps Pilate took (to release Jesus)…In fact, the crowd started to accuse Pilate of being a traitor to Caesar!” (Wiersbe, 381)

“Pilate will let his political position overrule his justice. It is a terrible thing, even today, when government, whether it be church or state government, gets into the hands of men who are hungry for power and do not regard either God or man.” (McGee, 491)

13. “This ‘judgment seat’ was the place where Pilate sat to render the official verdict. The seat was placed on an area paved with stones known as the ‘pavement.’” (MacArthur, 1419)

14. “John is here reckoning time by the Roman method of the day beginning at midnight.” (MacArthur, 1419)

“Well-meaning preachers have often said that the crowd that on Palm Sunday shouted ‘Hosanna!’ turned right around and shouted ‘Crucify Him!’ on Good Friday. However, it was two different crowds. The Palm Sunday crowd came primarily from Galilee, where Jesus was very popular. The crowd at Pilate’s hall was from Judea and Jerusalem, where the religious leaders were very much in control. “ (Wiersbe, 381)

“God – the cross is a propitiation. It is the mercy seat where God can extend mercy to you and me.

Lord Jesus __ It is a sacrifice. He is the Savior, and He makes Himself an offering for sin.

You and me __ for believers in Christ Jesus, it was a substitution. He took my place and He took your place. (1 Peter 2:24)

World __ The cross is nothing but a brutal murder.