Revelation 5 The Lamb of God 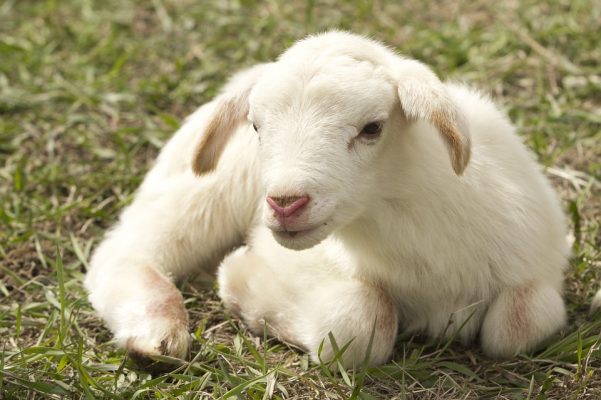 Revelation 5 The Lamb of God

Are you planning on going to heaven? You might want to know something about it. You will find the Lamb there.

This chapter tells us about what is happening and going to happen in heaven.

The church will be in heaven with Jesus and not go through the Great Tribulation.

Open your Bible to Revelation 5.

1. John is telling us what he saw.

The person (God) sitting on the throne is holding a book in His right hand.

There are eight times that the word “book” appears in verses 1 through 9.

The book he is holding is a scroll.

There is writing on both sides of the paper.

Exodus 32:15-16 tells us that the Ten Commandants were written on both sides of the tablets.

This is an important document.

This scroll is “rolled tightly and sealed closely with seven seals.” (McGee, Thru the Bible: Volume V. [Nashville: Thomas Nelson, 1983], 932)

“Roman law required that a will be sealed seven times.” (McGee, 933)

“In handing the scroll to the Lamb, God shows that he has transferred his power and authority to the Lamb. (Easley, 90)

2. The name of the strong angel is not given.

He proclaimed with a loud voice

His voice had to reach everywhere in the universe.

Someone had to be found “Who is worthy to open the book, and to loose the seals thereof?”

“The nature of the question suggests that most will be precluded from opening the book due to their lack of worthiness.” (Patterson, Paige, The New American Commentary, Volume 39 Revelation [B & H Publishing Group, 2012], 163)

No one is answering!

In Luke 19:41 Jesus wept over Jerusalem.

John wanted to be able to see what was in the book.

5. One of the elders spoke up telling John to Stop weeping.

Look! The Lion that is from the tribe of Judah, the Root of David,

Jesus comes from the Root of David.

Genesis 49:8-10 predicts that a Messiah will come from the tribe of Judah.

His lineage is recorded in Matthew 1 and Luke 3 back to David from both of His parents.

He prevailed to open the book.

“At the cross He defeated sin, and all the forces of hell.

Believers are overcomers through His overcoming.” (MacArthur, 167)

He was literally in the middle of the throne.

Three descriptions showing us this is Jesus:

These three descriptions can be found in Easley’s book. (93)

He is standing ready for judgment.

“The judgment of the Tribulation is about to strike the earth.” (McGee, 936)

As it had been slain

“Indicates the redemptive and vicarious, substitutionary dead of Christ.” (McGee, 936)

The Lamb means a little lamb. This shows its gentleness and its willingness to be sacrificed.

7. And he came and took the book out of the right hand of him that sat upon the throne.

“He is beginning to act as Judge. The movement here is important.” (McGee, 935)

8a. And when he had taken the book, the four beasts and four and twenty elders fell down before the Lamb,

They offered the same worship to Jesus as they did to God.

“This offers convincing proof of Christ’s deity, since only God is to be worshiped.” (MacArthur, 170)

8b. Each one This refers to the twenty-four elders

“The harps held by the elders probably symbolize all of prophecy.” (MacArthur, 171)

Used in worship at the temple.

David “compared his prayers rising to God to the smoke of incense.” (Easley, 94)

Let my prayer be set forth before thee as incense; and the lifting up of my hands as the evening sacrifice. Psalm 141:2

9b. Speaking to the Lamb [Jesus] Thou art worthy to take the book, and to open the seals thereof:

Because He wast slain, and hast redeemed us to God by thy blood

By His crucifixion Jesus bought our salvation by shedding His blood for you and me.

Every kindred, and tongue, and people, and nation are included.

You have been forgiven of your sins.

10. And hast made us unto our God kings and priests: and we shall reign on the earth.

“The present priesthood of believers (1 Peter 2:5,9) foreshadows that future day when we will have total access to and perfect communion with God.” (MacArthur, 172)

“During the millennial kingdom, believers will reign upon the earth with Christ.” (MacArthur, 172)

11. And I beheld, and I heard the voice of many angels round about the throne.

John is looking into heaven and heard many worshipping the Lord.

Not only are the beasts and the elders: singing but also many angels.

The number could not be counted.

Probably louder than a room full of children!

“The emphasis is on Christ’s death providing a perfect redemption, because of which He must be given worship, praise, and adoration.” (MacArthur, 173)

Jesus is Worthy… to receive:

Not only in heaven but the earth, under the earth, too, on the sea, and all things in them were singing:

Blessing, and honour, and glory, and power, be unto him that sitteth upon the throne, and unto the Lamb for ever and ever.

To God sitting on the throne and to Jesus

And the four and twenty elders fell down and worshipped him that liveth for ever and ever.

“If you are not in the habit of praising and worshiping Him, why don’t you start right now?”(MacArthur, 173)