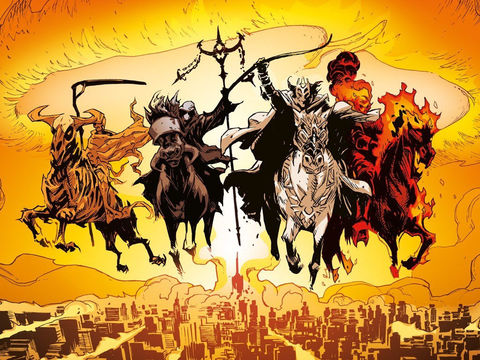 There are seven seals in Revelation. They contain God’s judgments that happen after the rapture and before the second coming of Jesus.

As He was sitting on the Mount of Olives, the disciples came to Him privately, saying, “Tell us, when will these things happen, and what will be the sign of Your coming, and of the end of the age?” Matthew 24:3

MacArthur gives us Parallel between Matthew 24 and the seven seals:

But all these things are merely the beginning of birth pangs. Matthew 24:8 First four seals

The last three seals are worse.

“Therefore be on the alert, for you do not know which day your Lord is coming.” Matthew 24:42

Then I saw when the Lamb broke one of the seven seals,

I heard one of the four living creatures saying as with a voice of thunder, “Come.”

The Four living creatures are cherubim.     Ezekiel 10:15 and see the discussion in Revelation 4:6-8.

Remember your mother calling but you did not respond. Now your daddy is calling.

I have read in several commentaries that Come here could mean “Go”.

The cherubim are sending out the white horse.

This is from Revelation 4:6b:

“Horses in Scripture are associated with triumph, majesty, power and conquest.” (MacArthur, 178)

“The world’s desperate desire for international peace will serve as the bait for the satanic trap.” (MacArthur, 178)

He who sat on it had a bow;

The rider is not known.

Arrows are not mentioned.

A crown was given to him, and he went out conquering and to conquer.

Some believe the rider of the white horse is Jesus.

Remember, Jesus is opening the scrolls, therefore He cannot be the rider.

He “has won a crown from the world for his triumphant achievements leading to world peace” (MacArthur, 179)

This leads some to think the rider is the Antichrist.

The other three riders do not represent individual but impersonal forces (war, famine, and death), so we should also view this one as a force as well. (MacArthur, 179)

It is interesting to me that the Antichrist will be seeking peace! But it is the seeking of peace that gets him “elected” as a worldwide leader.

3. When He broke the second seal, I heard the second living creature saying, “Come.”

The second seal is broken, and the second living creature said “Come.”

Now a red horse went out.

This rider was granted to take peace from the earth.

The Tribulation expresses “God’s wrath poured out on the world.” (MacArthur, 180)

Men would slay one another

A great sword was given to him

This “refers to the short, stabbing sword a Roman soldier carried into battle” (MacArthur, 180)

Being on Earth during the Tribulation will not be pleasant!

5. When He broke the third seal, I heard the third living creature saying, “Come.”

The third seal has been broken and the third living creature said “Come.”

War brings about famine “as food supplies are destroyed and those involved in food production are killed.” (MacArthur, 182)

The pair of scales the rider carried indicates that there will be a shortage of food.

6. I heard something like a voice in the center of the four living creatures

God’s voice? The four living creatures were near the throne of God.

A denarius is a day’s wage.

We hear about inflation in countries around the world and their buying power is greatly reduced.

The quart of wheat and the three quarts of barley each would feed one person per day.

The wheat would almost be enough for one person in a day.

The barley would feed three people but is low in nutrition. (MacArthur, 183)

It will be difficult to feed a family on a person’s wages.

Do not damage the oil and the wine.

This is only the first half of the Tribulation with the worst coming during the second half. (MacArthur, 183)

7. When the Lamb broke the fourth seal,

Again, when the fourth seal was broken John heard the voice of the fourth living creature saying, “Come”.

8. I looked, and behold, an ashen horse;

This time the horse is ashen colored. His pale body is “the gray-green color of human corpses” (MacArthur, 108)

John knew that the rider was named Death.

Hades was following with him

“While death takes the body, hades is the place where the spirit of a lost man goes.” (McGee, 943)

Authority was given to them over a fourth of the earth

If this were to happen today, 1.5 billion people would die.

To kill with sword and with famine and with pestilence and by the wild beasts of the earth.

Death will use the following:

Lions, Tigers and Bears are some of the first wild animals that come to mind.

“Most creatures dangerous to man are either extinct or isolated in unpopulated regions. But one explanation may be that the most deadly creature of all, the rat, thrives in all populated areas. Rats have been responsible for uncounted millions throughout history, both by eating food supplies, and especially by spreading disease. The most infamous and devastating occurrence of rat-borne disease was the Black Death, a fourteenth-century outbreak of bubonic plague that wiped out one-fourth to one-third of Europe’s population. In a world ravaged by war, famine, and disease, the rat population may run wild.” (MacArthur, 184)

It is a terrifying thing to fall into the hands of the living God. Hebrews 10:31

How will we escape if we neglect so great a salvation? Hebrews 2:3